This post is a few days late and so I apologise. I did post my weigh in on Instagram on Monday, but it’s all been a bit all over the place, what with everything with Mum and so on.

The past 36 hours or so have been such an emotional rollercoaster. First a little backstory. If you read my confession post, then you’ll know I’m due to have a hysterectomy. I’m seeing the surgeon on Friday and having my pre-op screening on Monday so I think the big day is drawing ever closer. This has made me really focused and really determined to want to do well. I’ve not fallen off the wagon, I’ve not slipped or cheated or had any bad days.

I wanted to lose 3 stone; over 10% of my original body weight and get my BMI into the 40’s. Yesterday, I thought I had just sneaked in – 49.87 to be exact after having lost another 4lbs this week to bring me down to 23st 6lbs – a total loss of 1st 13lbs in 5 weeks. It was brilliant. I was over the moon. Until this morning.

We have to rewind a little again, when I started this plan, I bought a new set of scales with Bluetooth, but they were a faff to set up and didn’t connect with my phone properly so they just got lost into the mess of my room, but the important thing to note is that when I was trying them out they were giving me the same start weight as my bathroom scales, and only had a +/-2 or 3lb discrepancy depending where I put them, but if in the same place, they give the same weight no matter how you stand on them, or how many times you get off and back on to them. I used them once more to double check my first-week loss and it gave a similar result to my bathroom scales and so I stopped using them.

My bathroom scales however, are much more temperamental; they get fussy about how exactly you stand on them as well as where about they are in the bathroom – if you: Stand… Weigh… Get off… Get back on… Weigh again, then you’ll get two different nimbers. It also varies if you look straight ahead or down at the number, as well as if you are more towards the front or back of the scales.

In retrospect, I was stupid to use those scales, given how much they vary but after the first weigh in (my first loss) I felt ”locked in” and they didn’t seem to vary so wildly in their results. As the weeks have gone on they seem to be getting worse so I’ve been taking the average reading, not the lowest and not the highest.

Then this morning I came across the other scales and thought I would try them out thinking there would be a couple of pounds in it. There’s not. There’s really not. 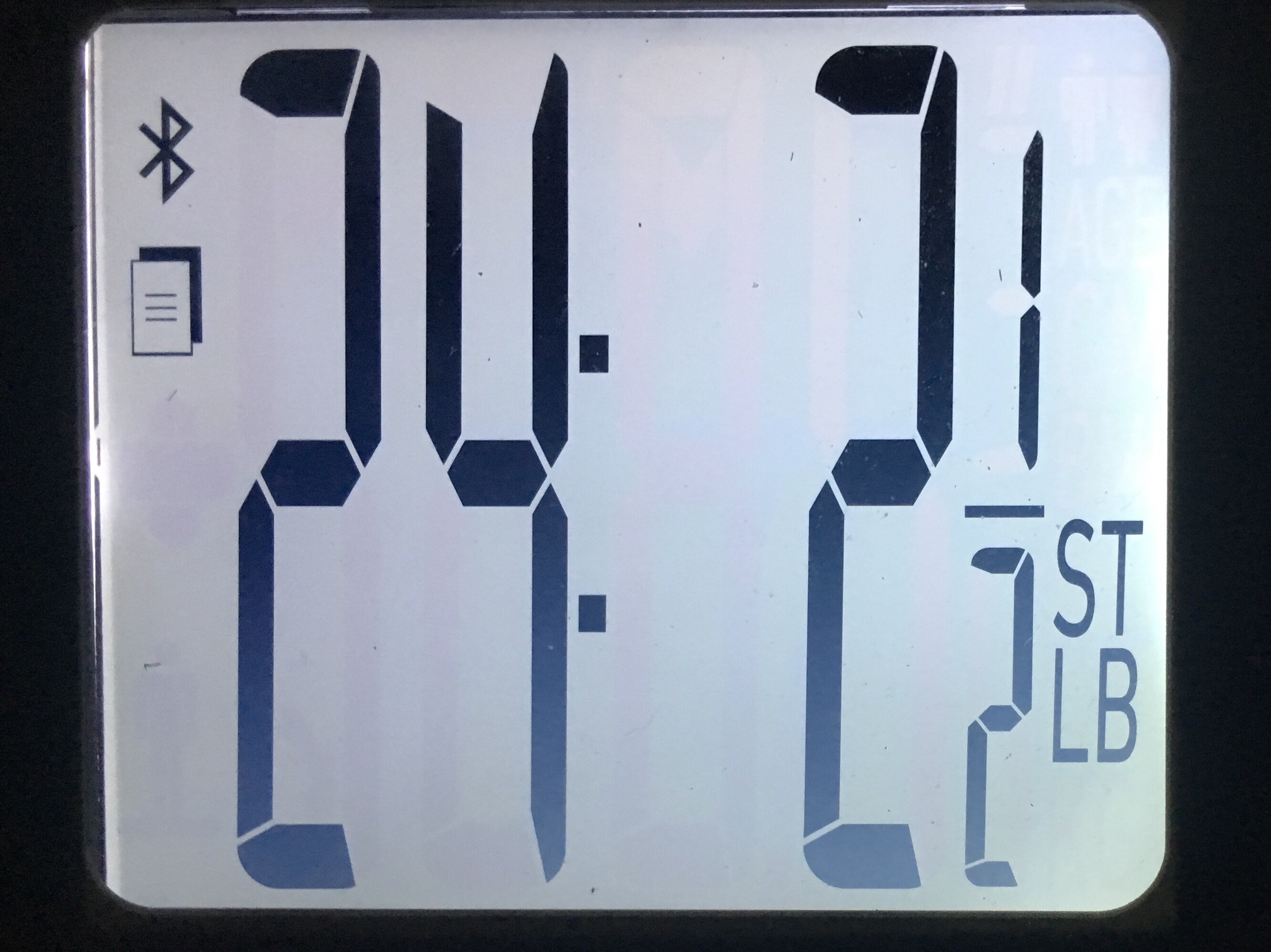 So what does all this mean? Well, I’m upset and disappointed obviously. It’a like I woke up and put on 10lbs. On the other hand, I’ve still lost 1st 2½lbs in 5 weeks that’s a shade over 16lbs, nowhere near the 35lbs I wanted – not even half in fact, but I could have very easily put that on. I have been known to gain that much in a week. Of course it also means that my BMI is not in the 40s and I don’t think it will be by Friday, it would mean losing 10lbs in 2 days.

I feel a little cheated if I’m honest. I have lost more with Slimming World and that has included cheat days. Maybe I was too rigid, too committed? Maybe I should of had that McDonald’s last week. Perhaps setting my calories to 1000 was too high and should have stayed down at 800. Maybe I’ve just gotten a bit old and metabolism has slowed down. Maybe it’s the steroids. Maybe I’m using on to eater as well as fat. Maybe I’ve lost fat and gained loads of muscle that’s weighing heavy. Each of these are less and less likely.

I can’t give in now with so few days left. I just have to see it out until Sunday. I still have to figure out what I’m doing on Monday and beyond so stay tuned for that.

I don’t know whether to go back and change my losses so the graph stays the same or to just plot this week as a giant gain. I don’t think the latter is a true reflection of what really happened. I’m sure I’ll figure it out.

This site uses Akismet to reduce spam. Learn how your comment data is processed.